Pattullo Fountain, Woodstock, Ontario. Andrew Pattullo  left $1,000 to the city to build a fountain in his own memory.
The Pattullo Fountain was financed by Andrew Pattullo. It was purchased in 1916. At that time it cost $1,050. It looks just like it did when it was first built, thanks to a recent $53,000, two year restoration project.


Andrew Pattullo was born in [Caledon Township, Peel County, in 1850] and grew up in Woodstock. In 1875 he joined The Sentinel newspaper as a junior partner. In 1880 Andrew bought out his partner and brother and joined The Sentinel with The Review. All of his life he worked on the paper but in 1903,passed away

In his will, he bequeathed "to the Corporation of the City of Woodstock the sum of one thousand dollars for the purpose of erecting a public fountain on the Market Square or on one of the City Parks, as the members of such Council may see fit".

Nothing happened with the money for a long time. After 1906, the City Council began to plan to build a new city hall on the site of the old Town Hall (now Woodstock Museum) and further stalled the erection of a fountain until after the proposed city hall was built. World War I effectively cancelled such rebuilding plans. Finally, in 1915, the City formed a committee to choose a suitable fountain, consisting of the Mayor (Kemp), two Aldermen and Andrew’s brother, George R. Pattullo.

A fountain design , "Maid Of The Mist", was manufactured by J.L. Mott & Company, New York. Made of cast iron, it was delivered in sections to Woodstock on November 20, 1916. The 16’ 8" high figure of a woman pouring water into two pans, was assembled and mounted within a landscaped area, north of the City Hall. Between circular and angled walkways were beds of tulips planted by Woodstock Horticultural Society. The fountain was first officially turned on in what was then City Hall Square on May 28, 1917. 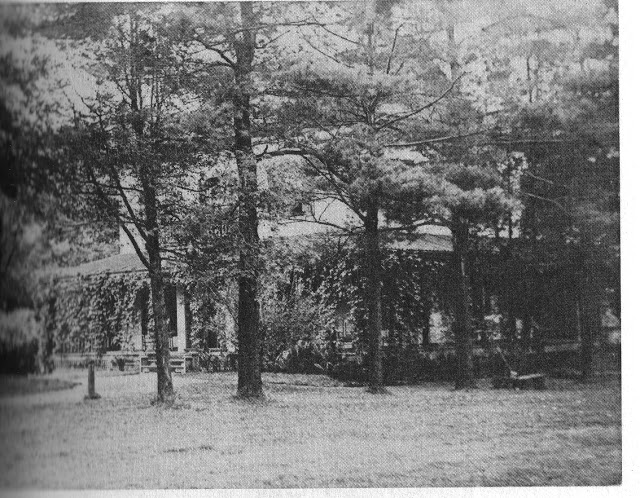 Burnside, the home of George Robson Pattullo I & family, Woodstock, Ontario. In 1879-80 he bought nine lots at the east end of town, at Dundas and Hincks streets, where he built the “substantial two-storied brick” house with “a wrap-around veranda [, . . .] a big country kitchen and breakfast room, and [. . .] a good-sized drawing room that was put to constant use since there were always relatives and other guests to stay.” Burnside also had “extensive lawns, trees, gardens, an orchard, and a number of farm animals to supply the household necessities.” -- Robin Fisher, DUFF PATTULLO OF BRITISH COLUMBIA (University of Toronto Press, 1991), pp 9, 11-12. He credits the photo to Mrs. E. Zimmerman. 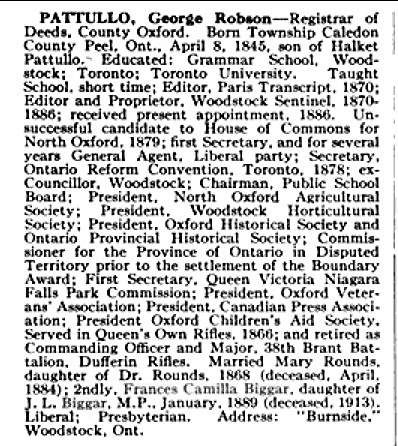 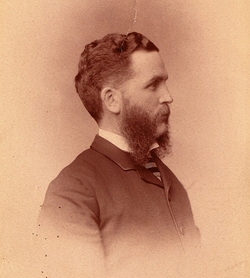 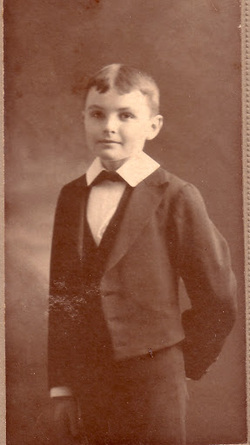 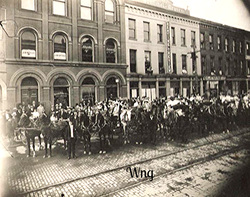 The newspaper merger actually took place soon after 1875, while George Pattullo, Andrew’s brother, was still listed as Editor and Publisher. From 1880 until his death, Andrew had been the liked and respected Editor and Publisher of The Sentinel-Review; local Member of Provincial Parliament (for North Oxford) since 1896; a president of the Canadian Press Association for 3 years; a president of the Dairymen’s Association of Western Ontario; and the founder and first president of the Ontario Good Roads Association. In his spare time, he was an accomplished platform speaker, in demand across both Canada and the U.S.A..Published since the 1850's and has gone by several names, including The Daily Sentinel-Review, The Weekly Sentinel-Review, The Woodstock Herald, The Woodstock Monarch, The Woodstock Times, The Woodstock Review and The Woodstock Sentinel. Although having gone through different names over its lengthy history, it was originally two newspapers. The Woodstock Sentinel began on Jan. 1, 1854, while the Woodstock Review first appeared Oct. 1, 1870. The two papers would merge about 16 years later on Saturday, Sept. 11, 1886 with George Robson Pattullo serving as the first editor when it was a weekly and his brother, Andrew Pattullo, after it became a daily.[1] 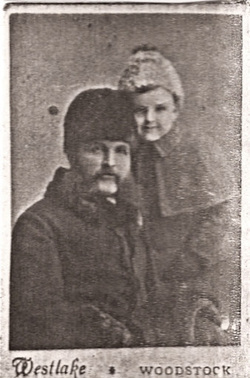 George Robson Pattullo I (1845-1922) and child. He and his first wife, Mary Ann "Minnie" Rounds Pattullo, had four sons and four daughters 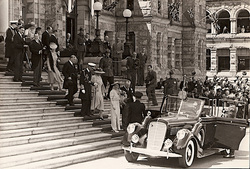 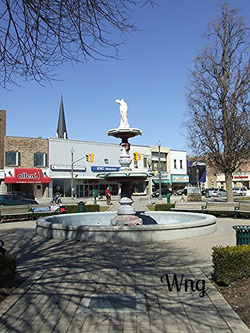 On Saturday, June 10, 1961, a refrigerated mix of water and milk powder flowed in the Pattullo Fountain. It was one of the attractions during the second annual Dairy Day to be held in Woodstock.  Alfred Burman, managing editor of the Sentinel-Review, who came up with idea to put the powdered milk in the fountain for Dairy Day in 1961.noted, "With some 5,000 pounds of ice-cooled, creamy milk circulating around her, the little [Lady of the Fountain] in her milk bath was easily the centre of attraction as a large gathering milled about Woodstock's historic city hall". 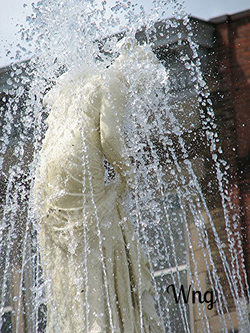 A large quantity of milk powder had gone bad at the Silverwood's Dairy at Canterbury and Huron Streets. Someone then suggested putting the inedible powder to use by re-circulating it in the fountain, instead of plain water. The liquid was cooled with ice to stop it getting any worse (and smelling?) during the Dairy Day event. The flowing milk in the fountain caused a furore when local church and anti-poverty groups heard of it, not realizing or believing that the milk was from powder that was rancid. Careful onlookers later alleged that small worms could be seen floating in the white liquid, providing visible evidence that the powder had truly been unfit for human consumption. 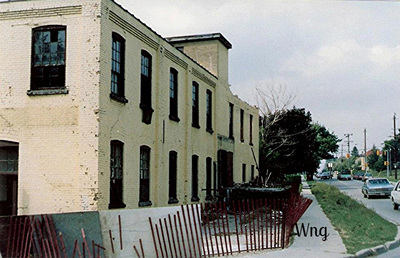 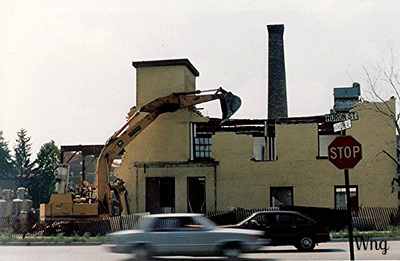 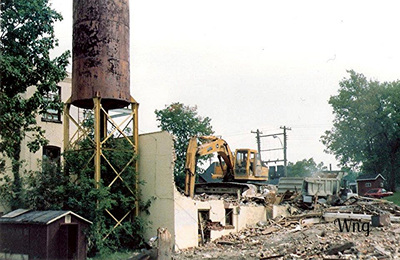 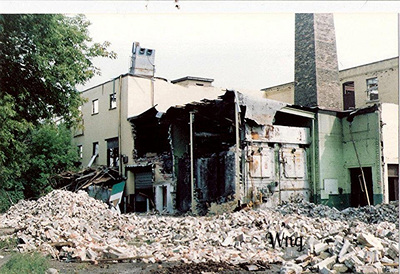 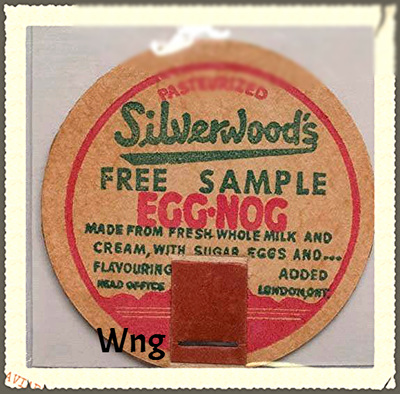 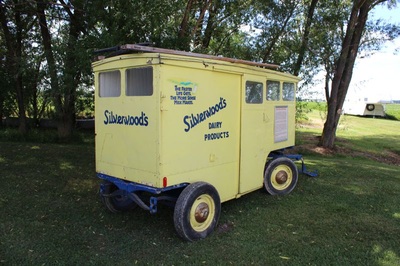