Herbert William Clark competed in big wheel bicycling races in Woodstock from 1885 to 1895. (A big wheel bicycle or Penny Farthing was all made of steel and equipped with a 1.25 inch hard rubber tire. The front wheel measured 50 inches in height and the rear wheel was [15] inches. The rider sat atop the high wheel, with handlebars close to him.) Clark was also a champion amateur bicycle rider for the Dominion of Canada. Clark quickly developed into the fastest high wheel rider in North America and even won the World Championship at Chicago. Herbert Clark was a member of the Woodstock Amateur Athletic Association (WAAA), which was created in the early 1880s to provide sporting and social entertainment for the May 24th and July 1st celebrations.
In 1883, the WAAA built Canada's first quarter-mile bicycle track. The association purchased seven acres of the old racetrack from the Woodstock Racing Club on the banks of the Thames, in the northwest corner of the city, where the Eureka moulding shop once stood (now the sites of Standard Tube and Thomas Bus) to build a sports field. The headquarters for WAAA was located in the old Bean and Westlake building [on Dundas], which became the Recreation Bowling Alleys.
The track was built of asphalt, the home stretch was sixteen feet wide and the rest of the track was about eight feet. In 1884, the track had been widened and a new coat of asphalt was re-laid. The Woodstock track was considered the best in North America, with Montreal ranking second, and many noted riders from all over North America trained here including the long distance sprinter champion Tom Longboat.
On May 25, 1885, Woodstock hosted the Canadian Wheelmen Association's Annual Meet in which thousands of the best professional and amateur athletes from all over the Dominion participated. This event drew over 3,500 people and consisted of different sporting events like high wheel bicycle races, tricycles and bicycle races with no hands on the steering bar, as well as sprinting. Herbert Clark was the [bicycle] champion of the day winning the one-mile and three-mile races. He was also the Canadian championship of the five-mile race.
In his first year of cycling, Herbert defeated the British rider Lavender. For three years Clark was the big wheel champion of Canada. He won on both Canadian and American tracks. He was termed "the first great Canadian bicycle rider". Herbert Clark retired from bicycle racing at twenty years of age.
Sources:
- Martin, W. H. 'History of Woodstock's Early Bicycling Days', The Daily Sentinel Review (Saturday May 3, 1919), p. 10
- 'Woodstock Amateur Athletic Association', Oxford Through Time (March 1982) Oxford Historical Society Special Sports Issue
- 'The Passing of the Woodstock Athletics Associations Grounds', The Daily Sentinel Review (Saturday Nov. 22, 1913) " 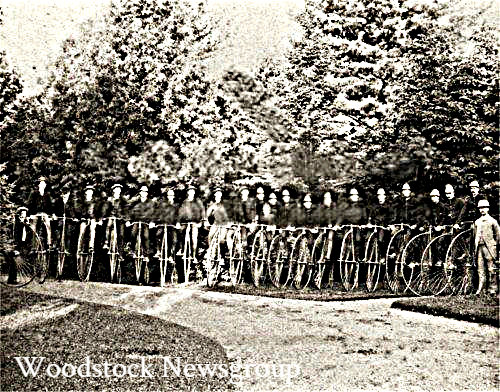