Corner of Winniett and Drew Street.
Tobin Arms was a firearms company started in 1905 in Norwich, Connecticut, USA. It produced side-by-side and double-barrel shotguns in various grades. The company moved to Woodstock, Ontario, Canada in 1909 or 1910. It then made shotguns until 1925 before shutting down.

Tobin Arms Manufacturing Company, Limited, was incorporated on August 9, 1909, with its principal place of business stated as Woodstock, Ontario, Canada. Again the company produced a line of Tobin Simplex Guns in 12- and 16-gauge and a variety of grades from $25 to $250. In addition, a hammer double using the same frame and bolting as the hammerless was added to the line at $20, and a simple .22 caliber single-shot Boy Scout rifle was added to the line of shotguns at $5. Advertising by Tobin Arms Manufacturing Company, Ltd. continued into 1916, but by then at least part of the factory had been taken over by the Arnold Thompson Tool Company. The generally accepted serial number range for hammerless doubles was 11,090 to 18,395. Tobin Arms Manufacturing Company, Ltd. is not listed in the Woodstock City Directories after 1916, and its charter was surrendered to the Provincial Secretary and Registrar on December 19, 1921. Frank Major Tobin lived the rest of his life in Woodstock. For many years he was secretary of the Canadian Stove Manufacturers Association. He was also involved in the marketing of a collapsible boat and early experiments with milk cartons. Frank Tobin died October 10, 1939.
http://en.wikipedia.org/wiki/Tobin_Arms
Posted By Paul Roberts.
Frank M. Tobin was a Canadian born in Halifax in 1862. When in his 20's he moved to the U.S. and worked as an agent for various sporting goods dealers and firearm manufacturers. By 1903 he had had enough of the salesman's life, and with a group of local businessmen formed the Tobin Arms Company of Norwich, Connecticut. His aim was to build a quality side by side shotgun to compete with the established makers such as Parker, Lefever and Ithaca. To this end he purchased a patented design from a Californian named Clarence M. Wollam, called it the Simplex action and set about building shotguns in 12 and 16 gauge. 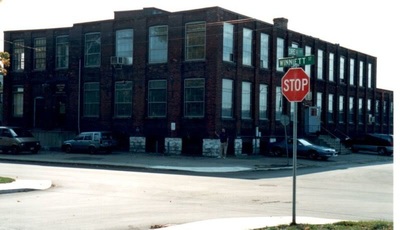 Mr. Tobin decided to return to Canada and relocated his factory to Woodstock, Ontario. The Tobin Arms Manufacturing Company Ltd. was incorporated on August 9, 1909 and by 1910 ads were being run in "Rod and Gun in Canada" magazine. Seven grades were offered ranging in price from $20 to $160. Each grade except the lowest had the option of adding ejectors and a single trigger ($20 each). Twin ivory beads added $1. These prices were equal to, or a little higher than the competition. Tobin's ejectors were expensive by the standards of the day, and as a result most Tobin guns are equipped with extractors. 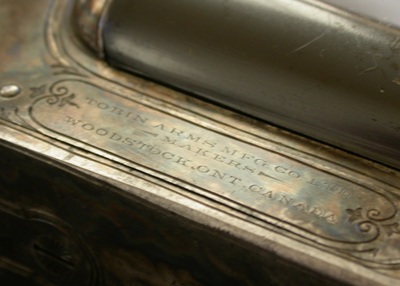 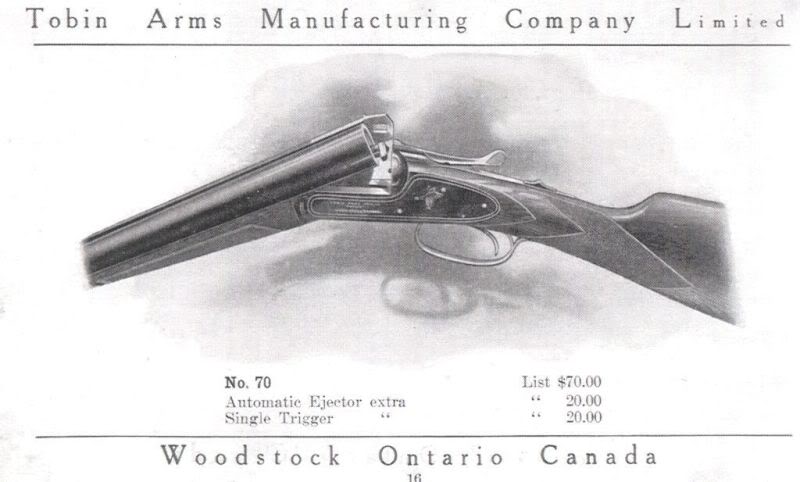