"In 1801 [1901?], William Dill became Woodstock’s first town crier. Little is known about Dill. However, Woodstock’s most famous, well liked but unofficial town crier, was George Jones. For a quarter of a century, this well-known figure was popular among Woodstock streets. In 1925, George Jones arrived in Woodstock and appointed himself as the 'town crier'. The people of Woodstock nicknamed him George 'Washington' Jones, a name he did not care for but one that stuck with him nonetheless. Dressed in a silk top hat, swallow-tailed top coat, bedecked in various medals, badges and flags, sandwich board and megaphone, George Jones would parade up and down Dundas Street advertising hockey and baseball games, and local events like dances, the Lion’s carnival, Woodstock Fair and the Rotary Bingo. Many local merchants hired George to advertise their products and services.
Prior to coming to Woodstock, George Jones lived in Chatham, Ontario (under the name George Gravy) where he was a shoe shine artist at both the Hotel Rankin and the old Hotel Garner. He was on speaking terms with Kent County’s great political figures of that era such as Archie McCoig, M.P. who later became a Senator, as well as R.L. Brackin, who temporarily detached most of Kent’s Tories from their traditional allegiance. George Jones’s age was uncertain. Not much is known of his early life but he said he was born into slavery in the southern United States around 1856.
It was said that George’s booming voice could be heard in Eastwood, five miles away, if the wind was right. During World War II, several Woodstonians serving in the armed forces in England claimed they could hear George’s voice announcing regular Saturday night dances. He was a friendly fellow who referred to almost everyone 'Buster Boy' or to the very few he called 'My friend'. Aside from being the town crier, George Washington (Gravy) Jones also shined shoes and washed windows. He had a shoeshine stand in the back of Sam Kostis’ restaurant at 369 Dundas Street in Woodstock.
George started out with a silver trumpet, which gave way to a single or double hand-bell which he rang before making his announcements aided by his brass megaphone. His megaphone is now an artifact in the Woodstock Museum. As George Jones’s eyesight failed him, he would be found tapping his way around town with his white cane. It was common to see some prominent citizen helping him across the street.
On December 8, 1951, George Jones died at the House of Refuge. His friends arranged a proper funeral and he was buried in the Baptist Cemetery in Woodstock; famous businessmen were his pallbearers. In 1952, the same friends, spearheaded by the late Percy Canfield, took up a collection and erected a headstone that read 'George Jones, 1856 - 1951, Town Crier'.
George 'Washington' (Gravy) Jones, Woodstock’s famous town crier is now immortalized in a song written by the city’s current town crier. In November 1992, Woodstock City Council adopted a resolution to appoint Scott Fraser as town crier. In 1994, Scott Fraser wrote about George Washington to composer James Gordon, who is part of CBC radio Ontario Morning program, 'Home Town Tunes'.
The song is as follows: George Washington Jones, by James Gordon, 1994:
George Washington Jones would walk/ With a sandwich board and a bell,
All through the streets of Woodstock/ And any local will tell
You that there was no finer town crier,/ No one more loved in this town,
With a voice filled with honey and fire,/ You could hear him for miles
around.
George Washington Jones/Is gone now but you can still hear his cry,
Calling all of Woodstock’s good souls home/ To that big town up in the sky.
With his silk top hat and his swallowtail coat/ He would stroll along Dundas Street,
And when George would open his golden throat,/ His words would echo for weeks.
From as far off as Sweaburg and Eastwood,/ And away up Innerkip way,
People claim that he could / Be heard just as clear as day.
George Washington Jones /Is gone now but you can still hear his cry,
Calling all of Woodstock’s good souls home/ To that big town up in the sky.
Way back in Second World War,/ When our boys were fighting in France,
They swore that they could hear Old George,/ Announcing the Saturday Dance.
Now the streets of Woodstock are silent,/ Our town has lost its voice.
We will miss George’s crying,/ We will miss that joyful voice.
George Washington Jones/ Is gone now but you can still hear his cry,
Calling all of Woodstock’s good souls home/ To that big town in the sky.
"
Sources:
- The Village that Straddled a Swamp,' Doug Symons;
- The Sentinel-Review;
'Woodstock Way Back When,' Doug Symons” " 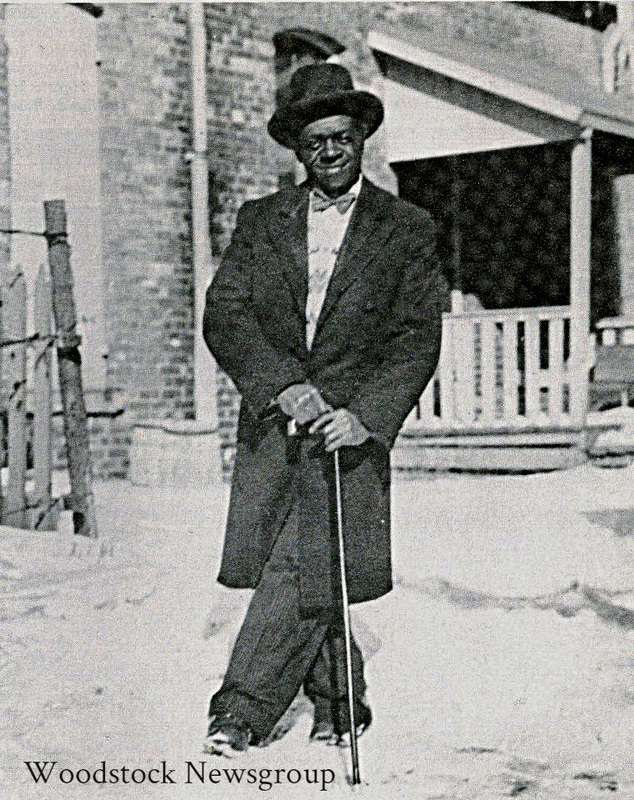