Woodstock was inaugurated as a city, in 1901. This building housed the horses, equipment and firemen. The stables, hook and ladder truck and hose truck storeroom were located on the first floor. The second floor included a reading room, four bedrooms, an office for the fire chief, the alarm system and battery, and a washroom. There was a fire pole running from the bedrooms on the second floor to the basement, for quick exit when the fire bell rang.Above the second floor, a bell tower was built. The bell was suspended here from 1899 until 1964, and weighs 2000 lbs. The bell itself has served many purposes. Until 1925, it was tolled by hand three times daily, at 7:00 am, noon and 9:00pm. The last bell, at 9 pm, was a signal for all the young ladies to return home; not an official curfew, but it worked just as well. The bell was tolled on several occasions after 1925, to notify the community that there was a child missing, and to mark the opening and closing of the polls on election days. The bell was moved to the entrance of Southside Park when it was taken down in 1965, and in 1997, it was moved to the City Hall, at 500 Dundas Street. The bell tower itself was also used to hoist the hoses to dry after a fire had been fought, before rolling and storing them.There were four horses, including Farmer, at the new fire hall. All the horses were trained to rush to the front of the fire hall building when the fire alarm rang. The harnesses and wagon were stored in a manner so that they were easily attached. Farmer retired after serving the Fire Department for almost 20 years in 1903, and all horses were retired by 1920, when the motorized equipment arrived.There were 15 firemen to begin with, once the “new” fire hall was built. Five of these stayed the night, and three of them were on duty at all times. When the firemen were busy fighting the fires, there was a faithful watchdog looking after the fire hall. This was Buster, the Fire Department’s mascot, who guarded the hall. It is said that he was buried behind the fire hall after he died, and his grave is marked with a headstone. The fire hall was in service here until 1975, when a second sub-station was built in the southeast section of the city.Before the electric alarms were introduced, the fires were announced through town bells. There were two fire bell towers, one in the east and one in the west side of town. The procedure was to run to the nearest bell calling, “fire!” as you ran. Then, you pulled the rope on the tower to ring the fire bell, and waited to direct the fireman to the fire.Once the fireman arrived at the fire, there were two different procedures. If the blaze was close to a hydrant, they would deal with the fire directly, and douse it with thehoses. If it wasn’t, then a bucket brigade would be set up, taking the buckets attached to the fire cart. It was James Hay, the father of T. L. Hay, who first initiated the idea of having a water system in Woodstock. He wanted to have more fire protection for his furniture store. He also organized reserves of water for the downtown business core, in case of fire.
First picture
It was located on the south side of Dundas Street between Victoria and Bay Street.

It was located on the south side of Dundas Street between Victoria and Bay Street. 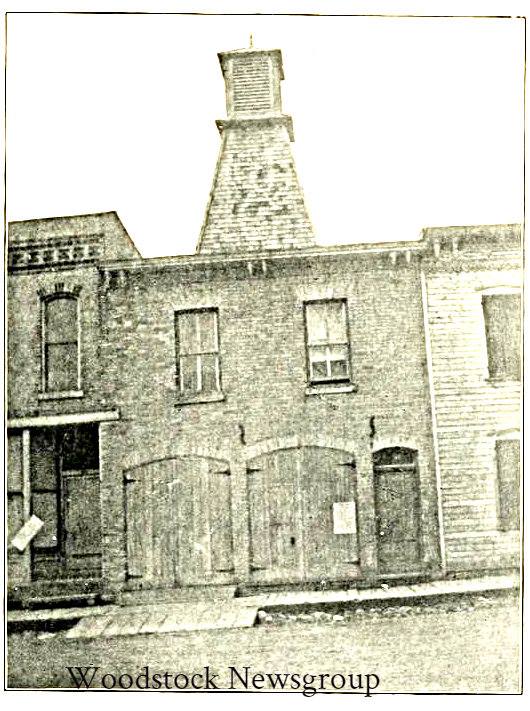