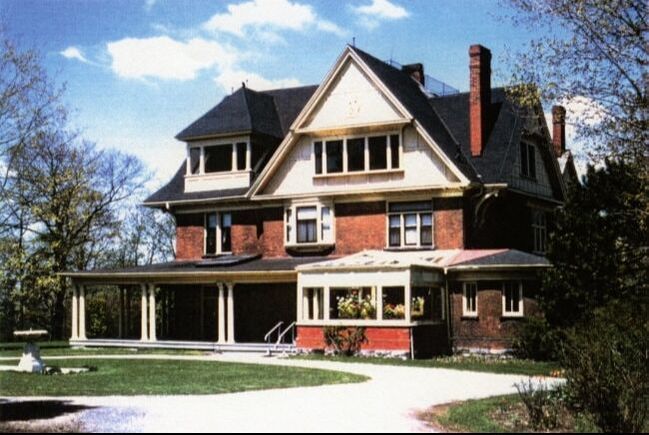 
​An Italianate style home built in 1878. There is a lamppost from the Vansittart farm on the property. ◙ A plaque for James Hay, a well-known industrialist born in Woodstock, who was one of the founders of the Board of Trade in 1878, elected to Town Council in 1880 and Mayor between 1893 and 1894.
The Hay Estate home was called "Eastdene". It was located on a hill at the corner of Dundas and Blandford St. (guarded from great public view by a 'hedging' of large old trees near the street). A red brick home based on designs of an 'English country house'. It was built by James Hay (the furniture manufacturer) and used for his private residence. His son James Hay Jr. used it as his summer house after his fathers death in 1893. It was eventually taken over by James Jr. son Thomas L. Hay who livered here with his wife Mary until her death in 1971. It sat vacant from 1971 and was demolished in 1975. In 2002, there is a housing complex and a plaza with a parking lot.
​Canadian Furniture Manufacturers The Canadian Furniture Manufacturers had its origins in a business known as Hay and Co. Woodstock businessman James Hay began his cabinet making business on May 17, 1844. Hay built a factory at Broadway and Dundas in Woodstock in 1860; it burned down as did its successor. He built Hay and Company a third time, at the corner of Mill and Main Streets in Woodstock, and built his own pumping station to guard against another fire destroying his business. This pumping station was purchased by the City in 1884. James Hay Jr., who was Woodstock's mayor in 1893 and 1894, was forced to sell the business, due to the Depression, to Oliver G. Anderson of Walkerton in 1895. Anderson Furniture expanded and at one time covered 25 acres and used a dozen buildings on the northwest corner of Mill and Main. Canadian Furniture Manufacturers merged with Anderson Furniture Company in 1901. At that time it was 1 of 21 Ontario locations for C.F.M, the largest furniture company in Canada. There was also a branch located in London, England. Mr. Anderson continued to manage the Woodstock Branch. The factory expanded and also made auto body parts for a number of years. The company closed the factory in Woodstock in 1929. About 400 men were employed there. A new industry, Wood-Mosaic Ltd, produced wood flooring and veneer in the building, after CFM closed, until the 1950s. Bowling alleys were built on the site in 1960. 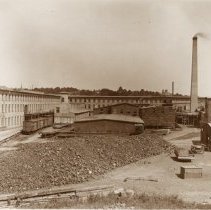 Canada Furniture Manufacturers merged with Anderson Furniture Company (formerly Hay and Company) in 1901. At that time it was 1 of 22 Ontario locations for C.F.M. The company closed the factory in Woodstock in 1929. About 400 men were employed there.
(Corner of Mill & Main St ) 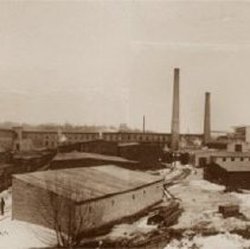 This view is from behind the Shipping Department and Chair Factory. It faces south east toward Mill Street. Taken from near Waterloo Street.
​Courtesy of the Woodstock Museum
Powered by