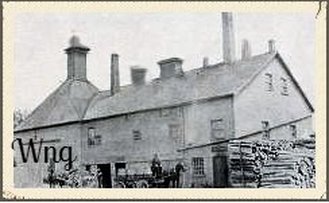 Today this is where the Oasis Steakhouse now stands on Dundas Street.
The first commercial brewery in Woodstock, Ontario, was the 'Woodstock Brewery'. It was located at the south-west corner of Dundas and Norwich Streets. The owners were S & J Collins and they owned the brewery from 1857-1884. A succession of additional owners kept the business going until 1914.


At one time he, his wife and children lived near Putnam, Middlesex, Ontario and on Lot 5 Concession 4 West Oxford Township, Oxford Co. He came with his parents to Canada in 1836 at the age of 3. He and his wife were members of the Wesleyan Methodist church.

John inherited a large sum of money from his father who ran the Collen's Brewery which was at the corner of Norwich Avenue and Dundas Street in Woodstock, Ontario.

John and his family spent the money very quickly . They bought a large house in the south end of Woodstock.  They would hang chickens in the shed and instead of plucking and dressing them, they would just cut off the skin and hack off the flesh they wanted.
Hannah John's wife took the last of the inheritance and bought a small house in the Teeple Street area where they lived after losing the large house.


"Stephen Collens (1801-1878) moved from England to Hamilton, Ont, in 1836, where he worked in a brewery for a few years. He decided he wanted his own brewery, so after borrowing money from his employer, he moved to Woodstock, Ont. and built a brewery on the corner of Dundas St and Norwich Ave.

Photos from private source
Powered by